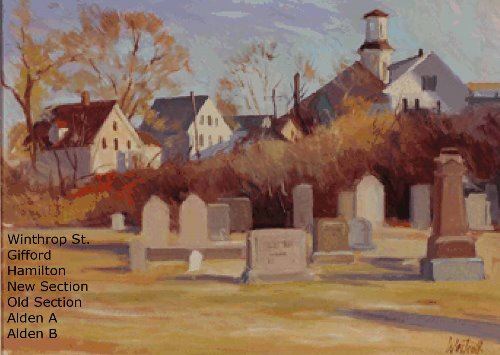 The Cemetery Commission with the Town is in the process of providing additional information regarding burial lots and the location of graves.

Provincetown's Historic Cemeteries and Memorials - Brochure are available in the Town Clerk's Office with a donation to the Cemetery Gift Fund.

Just to the north of Route 6E in Provincetown sits the town’s smallpox cemetery, known also as “Pest House Cemetery” and “No Names Cemetery.” This was established in the mid-1800s in response to the spreading epidemic. The historic hallowed site is now being lost to the wilderness.

The Smallpox Cemetery consists of 14 small numbered markers and the depression left from the demolished “Pest House.” Back in the 1800s, pestilence houses, or Pest Houses, were known as small treatment buildings for those plagued with smallpox. At this particular Pest House site, 14 people perished from the disease. The grave markers display no names, but the records are kept in the town’s “Book of the Dead.”

Their Names and Date of Death are: Built near Clapps Pond and at the bottom of a steep ravine in the scrub forest, the picturesque location tempers the terrible fate of the doomed occupants of the Pest House. Today the cemetery is being taken over by a grove of American Beech trees, and the shifting sands of Cape Cod.

Smallpox may have been wiped out nearly four decades ago but its connection to Cape Cod history is lasting. Whether it’s a stop at the new granite marker, a hike out to the hidden grave of Thomas Ridley, or traversing the hills and brush to visit the tiny smallpox cemetery, it is important to remember those who perished in the past of a terrible, and thankfully eradicated, illness.

In 2015 a simple granite marker was unveiled at the Winthrop Street Cemetery in Provincetown commemorating those who rest in the small cemetery off of Route 6.