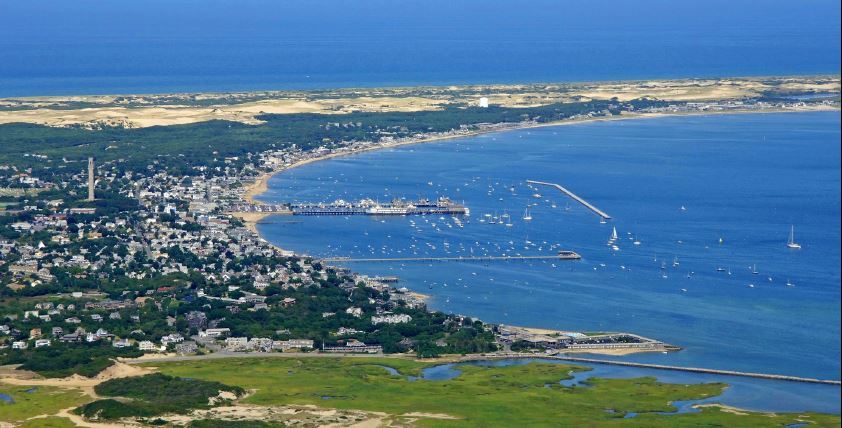 Today, one-half of the properties in town are connected to the sewer. By the end of this decade, every property in town will be able to connect to the sewer under this proposed long-term planning. Doubling the number of properties that can be served also means doubling the investment in the Town’s sewer infrastructure, including the treatment and disposal capacity and the collection system. Everyone will be able to enjoy the benefits, which include supporting the Town’s priorities for affordable and workforce housing as well as economic development, protecting the water quality of our harbor, ensuring that flooding from climate change won’t adversely impact our groundwater, and providing an affordable wastewater management solution, particularly for properties that have cesspools or older septic systems, or otherwise from a public health standpoint should connect to the sewer. The Sewer Expansion Plan will allow future needs for housing and economic development to be managed through the Town’s Growth Management process, rather than governed by the availability of sewer.

On-site Systems are not the Future of Wastewater Management

The increasing risks from climate-induced flooding that are expected to worsen this decade make it clear that onsite systems are not the future for wastewater management. Towns throughout Cape Cod are transitioning away from onsite systems to municipal wastewater management to plan now for their future needs, and governments at the Federal, State and County level are supporting these initiatives with substantial grants and low-interest loans. The Town’s Outreach Survey and Health Department Report from last year showed that there is interest in a sewer connection in all neighborhoods and that the public health needs are spread throughout the town. The current sewer system cannot provide the capacity nor serve many areas of the town to meet the public health needs and the interest of all those who would like to connect.

With all of the benefits that a town-wide wastewater management system can provide, and the ability of every property owner to connect to the sewer at any time, comes the responsibility to share in the cost. The Town has run out of options for incremental wastewater improvements funded only by users that want to or need to connect. The only way to provide sewer capacity for the affordable and workforce housing needed to support the employees that ensure that the town will continue to have the services and economy that they want and expect to have is through the proposed Sewer Expansion Plan. This Plan is also critical for serving the remaining areas of town that have interested property owners or public health and flood risk needs. Even with substantial grant support all abutters to the sewer will need to be assessed a betterment to pay for the Expansion Plan as is the case in every other town. Property owners who are connected to the sewer have already been assessed their fair share as a betterment, and the remaining property owners in town will be asked to pay their fair share too.

As with previous phases, the Town anticipates receiving a substantial share of the costs for this Sewer Expansion Plan in the form of government grants. But, the most generous grants are only available for the next several years, so it is important for the Town to move forward now with the proposed sewer project. Waiting until later to address the needs of different areas of town will cost a lot more.

When do I get to connect and what will it cost me?

Construction of the improvements to the collection system will be spread out through at least a five-year period, similar to the Phase 3 and 4 construction that occurred from 2010 thru 2014. Disruptive construction will not occur during any peak season, as has been the policy for previous phases. Under the proposed Sewer Expansion Plan, the remaining areas of the town will be served by the sewer system in several steps over the rest of this decade, starting with properties in the existing sewer district in 2024 and new areas being served between 2025 and 2029, with public health priorities and environmentally sensitive areas being served first. A communication plan will be developed for each area of town with clear information as to when construction will occur and when connections to the sewer may begin. Information will be provided for approved contractors who can connect you to the sewer.

As has been the case with all of the previous phases of the sewer system, the betterment will be affordable compared to the cost of an onsite system, and property owners may pay their betterment over a 20-year period if they prefer. For example, if paid over a 20-year period, the cost for a 3-bedroom residence is estimated to be about $1,000/year, and for a one-bedroom condo $350/year. The Town is very aware that some property owners live on a fixed budget and are concerned about the cost of being served by the sewer. Under an existing program, any lower income property owner can delay paying a betterment until their property is transferred. And, the Town is working on identifying existing and new financial resources to assist residents in affordable or workforce housing with their sewer user charges.

No one with a new septic system will need to pay a betterment until 20 years after it was installed.

Property owners who are connected to the sewer have already been assessed their fair share as a betterment, and the remaining half of the property owners in town will be asked to pay their fair share too, as a betterment that will be assessed to pay for this Sewer Expansion Plan which will provide them with the right to connect to the sewer. Properties that are not already connected or are committed to connect to the sewer will be assessed a betterment when sewer becomes available in their area of town. But no one who has a fully-compliant New Code Title 5 system and isn’t interested in connecting will need to start paying a betterment until 20 years after they installed their new onsite septic system.

No one with a new septic system will need to connect until their system fails.

No one with a fully-compliant New Code Title 5 system who isn’t interested in connecting will need to connect until their system fails as long as their system passes inspection. The current Board of Health policy requires inspection at the time of property transfer, and for condos, every three years. The proposed Board of Health policy which would go into effect following a public hearing would also require all onsite systems to be inspected every 5 years starting 20 years after installation. For onsite systems that are already older than 20 years, this inspection policy will be phased in over the next several years, starting with the oldest systems. While newer septic systems can be expected to last for 20 years and sometimes longer, the increasing risks from climate-induced flooding are expected to worsen this decade. Onsite systems are not the future for wastewater management and many property owners may find it beneficial to connect before this flooding risk increases.

Limitations of the Existing Sewer System

Town Meeting finally approved a sewer system for only the downtown area in 2000 after more than 50 years of saying no. Initially planned for 350 properties, the Town’s sewer now serves over 1,000, approximately 50% of the properties in town. The sewer system has been expanded in five phases over 20 years with more than $60 million invested in infrastructure to date. But it is still underutilized with 35% of the abutters to the existing sewer mains not yet signed up to connect. The Plant takes in about 10 times more flow on the peak summer day than in the low period of winter. Restaurant flow and grease are the biggest treatment demand during peak hours on the peak days. There is no other sewer system in the state that has to be built and operated so as to manage this large of a seasonal variation.

Limitations on Connections and Flows

20 years ago, voters wanted to limit growth in the downtown area, and the State required the Town to limit growth to the capacity of the Treatment Plant. Each property connecting to the sewer district was limited to a flow that it would be allowed to have on site. The only exceptions are for municipal buildings and public service uses approved by Town Meeting for housing and economic development. Only those who either must have or wanted to have a sewer connection were to be served. This meant that the sewer was planned for existing downtown businesses and only the others who wanted to connect. Uniquely in Massachusetts, the sewer district was defined by those who connect, not by the abutters. When the sewer district was expanded during later phases, Town officials kept this “checkerboard” approach. Unlike many other communities, there has been no General Fund taxpayer funding with the exception of the cost for town buildings. Grants and user betterments fund all of the capital costs and many areas have remained too expensive to serve with this funding approach.

An important cost allocation policy from 20 years ago was to make the sewer affordable for year-round residents. Downtown businesses were expected to pay their fair share of sewer costs since the system was sized for their peak season flows. Betterments have been assessed based on what the regulations would allow for an onsite system, since this is a number that can be readily determined for all uses.

Initially, 20% of the flow was from properties that were not yet in failure but could not be approved for a new onsite system, and those properties were allowed to delay indefinitely until their system failed. The Rooms Tax initially covered the shortfall from this delayed revenue, it has also covered town-wide planning costs and shortfalls in interest on the debt, and more recently the shortfall in user revenue which is less than the operating cost of the sewer system.

Site Constraints, Lack of Capacity and Priorities to Serve

There were also significant site constraints 20 years ago. Treatment and disposal sites had limited space for future expansion, and the system was sized initially without provision for growth. Any further expansion of the Plant site is constrained by protected conservation land and adding any more capacity will be more expensive than the phases to date. Not surprisingly with the successful implementation of the sewer project, as well as changing property ownership over the years, there was an immediate and increasing demand for connections and additional flows. The collection system has been expanded to serve not only public health failures and public service uses but also environmentally sensitive, low-lying, and densely developed areas. Between phases, lack of capacity has limited flows and new connections.