Overview: The Clapps Pond/Duck Pond ecosystem is crucial due to its size and opportunity to provide integrated management. The ponds themselves are co-owned by the Cape Cod National Seashore (federal), Division of Fisheries and Wildlife (state), the Town of Provincetown (40-acres). This combined ecosystem is defined by Route 6 on the south and a dune ridge to the north, with freshwater wetlands extending continuously from one pond to the other. The 68.4-acre conservation area on the south side of Clapps Pond is owned by the Massachusetts Division of Fisheries and Wildlife, but it is largely unmanaged. No parking is provided at the site, and it has become an unauthorized "transfer station" for old tires, mattresses and other trash.

Acreage: Approximately 100 Acres in Total Access: Parking currently takes place near Route 6, at the boundary of the property, yet no direct access is provided.

Uses: Currently a passive recreational area with great walking trails. Also an area known as Evans Field was a small ball field located on town land between the ponds but because it was created by converting a wetland, seasonal flooding made it unusable for much of the year. Use of this field as a ball field has been discontinued. Off-road vehicle riding, particularly motorcross cycles, for the past 20 years has impacted wetland quality. Bonfires and illegal camping at the west end of Clapps Pond have persisted.

Overview: This wetland system, approximately 3 acres in size, is located between Route 6 and Harry Kemp Way. It includes pond, cranberry bog, quaking bog, marsh, meadow, and shrub and tree swamp habitats. It is the town's most important habitat for the water-willow borer moth (Papaipema sulphurata), the threatened few-flowered sedge (Carex oligiosperma), and the only site in Southeastern Massachusetts for the bog twayblade orchid (Liparis loeselii). The town holds a strip of land nearby (0.63 acres), perpendicular to Harry Kemp Way, for general municipal purposes. Next to the wetland is a vacant 2.08 acre parcel owned by the Academy for the Performing Arts. Other lands adjacent to the property are held by the Conservation Trust and the town-owned Nicky's Park.

Access: Parking currently takes place near Route 6, at the boundary of the property.

Uses: The sanctuary is open to the public for passive recreational use. Existing uses are primarily pedestrian.

Overview: Foss Woods, the second largest undeveloped upland parcel in town, consists of 15 acres of sloping woodland between Route 6A and the town-owned Old Colony Nature Pathway in the East End near Mount Gilboa. The town's acquisition of the Foss Woods parcel has protected a significant patch of forestland for migration and one that contains extremely rare species such as the checkered rattlesnake orchid, found in only one other location on Cape Cod. The Eastern Box Turtle also exists in these woods.

Overview: Whistle Path Woods, once one of the largest remaining tracts of developable land in Provincetown, was purchased by the town in 2001. It includes a, half of a one-half acre red maple/tupelo swamp long its western edge. This wetland, formed in a blowout depression in the old dunes, has saturated soil owing to its intersection of the water table. The wetland provides important habitat diversity, a water source for wildlife, and absorbs stormwater runoff. Whistle Path Woods, like the rest of Provincetown, is composed of sands eroded off the Truro cliffs and reshaped by wind and waves over the past several thousand years. The dunes closest to the Harbor, including the ridges on the Whistle Path Woods property, are older than the dunes closer to the Atlantic. The dunes rise in dramatic steep ridges along the eastern perimeter of Whistle Path Woods. There is a pathway that runs through the property to connect entrances/exits for the enjoyment of resident and visitors alike.

Access: Accessible from Snail Road and Howland Street (primarily reached by walking along the Old Colony Nature Pathway) as well as by Thistlemore Road from Bradford Street. Well-maintained walking pathway extends from the railroad bed to Thistlemore Road.

Uses: Passive recreational area open to the public as well as a pathway link from the homes in the neighborhood to the Old Colony Conservation Pathway. Whistle Path Woods also provides a natural wooded greenbelt along 342 feet of the public recreational corridor known as the old railroad bed. Hikers, bikers and cross country skiers use this informal trail and enjoy the solace of the woods bordering either side of the corridor. 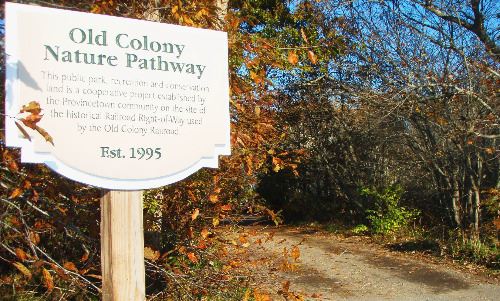 Overview: The railroad right-of-way is town-owned for its entire length (about 7,000 feet) except for a short section near the Truro line, and the western segment, which was converted into Harry Kemp Way and Railroad Avenue. The Path is now called Old Colony Nature Pathway and extends from Mayflower Heights to Howland Street. An attempt by the town in October 1994 to create a formal, paved recreational/bicycle path on the rail bed failed due to abutter and citizen concerns about paving the trail, but it is used by many people for jogging, walking, skiing, mountain-biking, horseback riding and dog walking. The trail has a varied surface that includes some sand and some hardened areas. 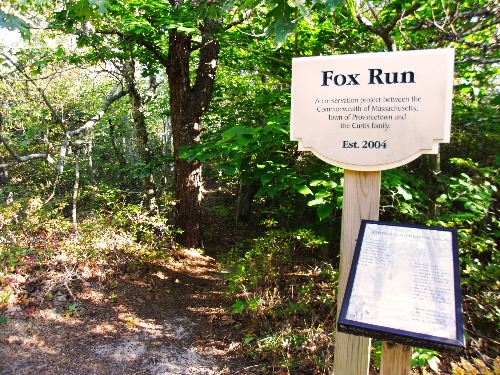 Access: Accessible from the Old Colony Conservation Pathway and closest to the Howland St. entrance/exit.