WEATHER ALERT Library Open for Extended Hours from 10am-5pm on Saturday as a Warming Location for Residents Read On...

The Provincetown Municipal Airport is a primary service airport with scheduled passenger service to Logan International in Boston, MA. Located in Provincetown, MA, on the northern tip of Cape Cod, the airport lies within the Cape Cod National Seashore sited on approximately 322 acres of federally-owned land administered by the National Park Service. The only other airport in the country located within a National Park is the Jackson Hole Airport in Wyoming.

Constructed in the 1940s, the Provincetown Municipal Airport consists of developed airside and landside areas maintained for airport facilities and operations, surrounded by undeveloped areas that consist of grasslands, coastal dunes, and freshwater wetlands.

Airside facilities include a single runway, runway 7-25, a taxiway system, aircraft parking aprons, an approach lighting system, navigational aids, and weather instrumentation. The runway was first paved in 1948, and was most recently reconstructed in 2003 including the construction of runway safety areas.

The west end and mid-connector taxiways at the airport are jug-handle shaped to accommodate the large DC-3 aircraft in operation at the airport in the 1940s and 1950s. Landside facilities at the airport include a terminal building, an aircraft hangar, an aircraft rescue and firefighting/snow removal system equipment garage, ground support facilities, the Michael A. Leger Memorial Sightseeing Shack, and an auto parking area. The terminal building was reconstructed in 1998 and is a single story wooden structure of approximately 4,800 square feet. Passenger facilities, TSA screening areas, and a conference room are all located within the terminal building. The airport facilities are owned by the town of Provincetown, MA but leased to and managed by Cape Air, which provides scheduled air service to and from Boston's Logan as well as fixed based operator (FBO) services to general aviation pilots and passengers. 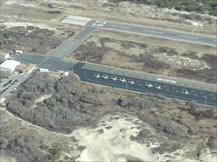