Wild turkeys have lived in most parts of Massachusetts since the time of the Colonial settlement. However, human development and hunting took their toll and by 1851 there were no turkeys left in Massachusetts. Restoration attempts started around 1911 but it took many relocation attempts before the population was successfully restored in the late 1990s. Today you can find wild turkeys living in most parts of Massachusetts. There are flocks even in Provincetown now! 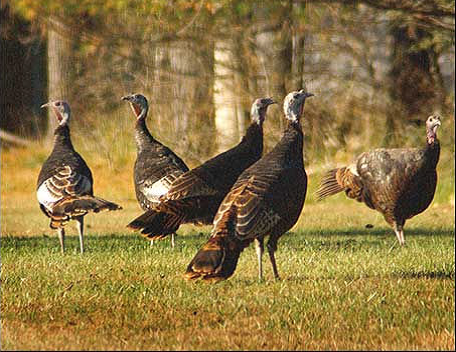 Wild turkeys live in flocks organized by "pecking order." This pecking order is a social ranking in which each bird is dominant over or "pecks on" birds of lesser social status. Pecking order has implications for people and nuisance turkeys. If a turkey views someone as dominant, they will act submissive or fearful. Turkeys may attempt to dominate people that the birds view as subordinates. This behavior is most noticeable during breeding season. Don't hesitate to scare or threaten a bold, aggressive turkey with loud noises, swatting with a broom or water sprayed from a hose.

Turkeys are active during the day, roosting at night to avoid predators. In residential areas, it is not uncommon for turkeys to roost on railings, roofs, or sometimes on vehicles. Gobbling, during breeding season, usually starts around mid-March, peaking in early May. This is when the males puff out their feathers, fan their tails and "strut their stuff." 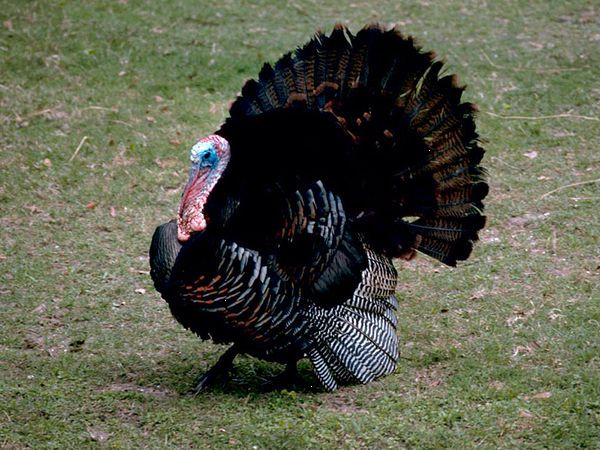 Male turkeys will peck windows and car bumpers during the mating season because they see reflections of themselves and think that they're seeing a competing Tom. Since the reflection does not disappear when the turkey confronts it, the bird will often continually display towards or attack the reflection until changing light conditions cause it to vanish. Covering low windows and glass doors can help deter them from pecking the glass. Rubbing soap on car bumpers to make them less shiny can also help.

indirect, can cause turkeys to act tame and may lead to bold or aggressive behavior, especially in the breeding season.

KEEP BIRD FEEDER AREAS CLEAN — Use feeders designed to keep seed off the ground, as the seed attracts turkeys and other wild animals. Clean up spilled seed from other types of feeders daily. Remove feeders in the spring, as there is plenty of natural food available for all birds.

DON'T LET TURKEYS INTIMIDATE YOU — Don't hesitate to scare or threaten a bold, aggressive turkey with loud noises, swatting with a broom or water sprayed from a hose. A dog on a leash is also an effective deterrent.

PROTECT YOUR GARDENS AND CROPS — You can harass turkeys searching for food in your gardens. Netting is another option to employ. In agricultural situations, some scare devices are effective.

EDUCATE YOUR NEIGHBORS — Pass this information along: Your efforts will be futile if neighbors are providing food for turkeys or neglecting to act boldly towards the birds. It requires the efforts of the entire neighborhood to help keep wild turkeys wild.

Turkeys are important and valuable birds in Massachusetts. If you are experiencing problems with turkeys or have any questions regarding them, contact your nearest MassWildlife District Office. More detailed information on turkeys is also available at Massachusettes Wildlife.

Massachusetts Division of Fisheries and Wildlife – Wild Turkey in MA